No tent or caravan,

nor fancy flat to rent..

But still we packed for holidays

A single mattress for Mum and Dad

Including all their lids.

Of course there was a Primus

And a teapot with a lid

With cups for Mum and Dad of course

And a beaker for each kid.

Clothes were in a suitcase

Shoes were in a box

Another held the ‘extras’

Including all the socks.

The pillows and the blankets

Were piled up really neat

As well as several hessian bags

In case of dirty feet.

We always took some books to read

with a torch or two as well..

But mostly read by candlelight

It somehow cast a spell.

Cartons held some food of course

And an ice chest had the drinks

We had everything we’d ever want.

As well as mozzie coils (and stinks!)

Everything was nice and neat

We felt so very happy

As in our truck we got! Email ThisBlogThis!Share to TwitterShare to FacebookShare to Pinterest
Labels: TRAVELLING..no tent or caravan... I cannot help but smile when I hear his name

or come across a photo…

He was my hero, my special person

He was the one who always had a smile,

a hug, and a lap to snuggle on.

I can still smell his pipe

and feel the softness of his cardigan..

and see the diamond pattern on the front.

He was very tall, and had strong shoulders

that gave me a favourite place to ride.

“You are, mikroúli mou.. nearly there!”

He taught me how to drain honey from the combs

and to always wear gloves “just in case”.

He didn’t think it was at all strange

when I named all the chooks ..

and it was he who quietened my grandmother

when she was about to tell me

which of my feathered friends was in the oven.

I was his shadow.. wherever he was, so was I.

He helped us pick fruit and flowers ..

so long as they weren’t our grandmother’s special ones…

No one in need ever went away empty-handed

and there were always a few logs to chop

for those who needed a meal but wanted to ‘earn’ it.

His kindness and generosity was valued by all

as was shown by the enormous procession

(that I at first thought was a parade)

that wound it’s way through the town and out to the cemetery.

I was just five years old,

with a heart that never completely healed.

‘Papauli’ is grandfather, ‘mikroúli mou’ is ‘little one’ in Greek. 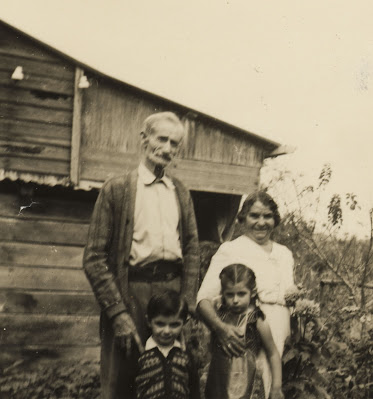 Email ThisBlogThis!Share to TwitterShare to FacebookShare to Pinterest
Labels: father, friend to all.., much loved grandfather, Papauli

THE LOVE OF A FATHER 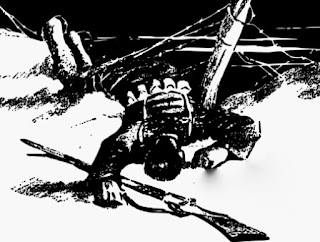 THE LOVE OF A FATHER

He had been wandering near the cliffs and along the beach

Searching for days, hoping he would find his son..

'Missing in action' they told him..no hope of finding him now.

There was so much debris, so many abandoned dugouts..

Some had wooden crosses, some, parts of uniforms..

Few had names. Here and there, there were departed souls..

Waiting for burial. His heart swelled with sadness..

So many young lives lost.

The battle was over, but the debris remained, shrouded in horror.

He'd been told by many that he would have to accept his loss..

His son wouldn't be returning to the farm. He would be alone..

He heard the birds before he saw them...

They were picking about a pile of discarded ration packs.

He heard a groan, surely no one had survived this carnage..

Maybe, just maybe..he called out as he stumbled towards the rubbish..

The birds flew off and he heard a voice..

He pulled away the heap of rubbish and saw a face, badly injured,

Half buried in the dirt. He scraped around him,

freeing him from a heavy plank..

He wore the uniform of the enemy,  just a boy,

about the same age as his son.

He couldn't leave him there, his family would be mourning him..

He half carried him, half dragged him to his farmhouse

a short distance away.

The young soldier was confused, not knowing what lay ahead.

He was treated with nothing but kindness and after some time,

The war ended and the young man eventually returned to his own home,

never forgetting that it was a father's love for his son,

that had saved his life.

Posted by Crissouli at 11:02 No comments:

Email ThisBlogThis!Share to TwitterShare to FacebookShare to Pinterest
Labels: lost.. forever loved.., THE LOVE OF A FATHER 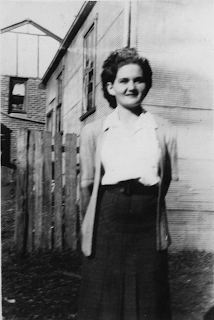 that you would have been celebrating your 91st birthday today...I wonder if you would have changed as little as your sisters did, both of whom reached 92 years...

I'm sure that your always encompassing smile and open heart would be the same. I remember your laughter, those twinkling eyes.. your pretence at being upset when Dad teased you about something.. and those swinging hips when you were actually annoyed. Dad would shrug it off, saying that you would be fine... or at least he hoped so.

You loved nothing better than being surrounded by family and friends..

It seemed the jug was always boiling, teapot warmed and that small kitchen table always had room for one more setting. Both you and Dad would be the first to offer help to any and all in need..  We were taught from a very early age that the greatest gift you could give anyone was to listen and reach out... I lost count very early on of the numbers of people you cooked a meal for, made up a bed, delivered "just a few items", took care of ill relatives or friends, offered a lift .. or in some times, dug through your own small wardrobe to clothe someone else.

What I miss most is having you see your grandchildren grow up to become the wonderful people they are.. and your great grandchildren...

So much to say, but so much already said..

Today, the anniversary of your birthday, I, along with so many others, remember you with love and admiration. Rest in peace, beautiful lady. 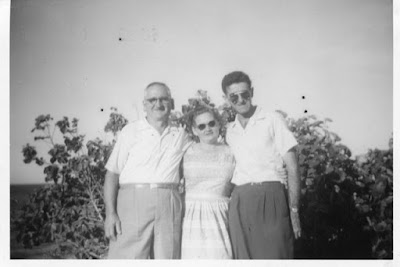 Posted by Crissouli at 12:07 No comments:

Email ThisBlogThis!Share to TwitterShare to FacebookShare to Pinterest
Labels: HARD TO BELIEVE... on what would have been your 91st birthday..

HOUSEKEEPING... or should that be BLOGKEEPING? 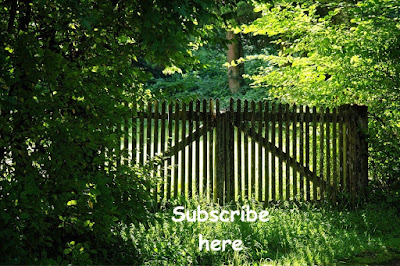 CHANGES TO SUBSCRIBING
Feedburner which has been the subscription function offered by Google, is no more. It is to be discontinued in July.
If you are already subscribed, there should be no problems as my list of subscribers has been transferred to a new service follow.it
All you have to do to subscribe is to click on the image (as above)  that is in the side column.... not the one above...
That will take you to follow.it and you will see a panel to enter your email address then you click on the green image that says Follow.
You will then be directed to confirm your subscription using the email account with which you subscribed.
You still need to confirm your request by by clicking on the link in the email you will receive addressed to the email you supplied.
Once that is done, you should receive a notification whenever a new post is published on this blog.
I thank you for your support.
Posted by Crissouli at 16:18 No comments:

Can You Hear Their Footsteps? 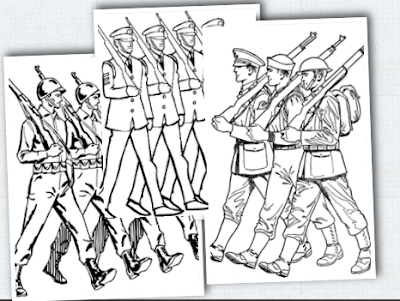 Can You Hear Their Footsteps?
I can hear them marching, Mummy..
right there in the street
there's Grandad and Uncle
and I see my Dad's big feet.
Left, right.. left, right..
Oh, they do look strong
Left, right, left, right
That's Dad's favourite song.
Their uniforms are different
why are they not the same?
Weren't they all together..
I wonder who's to blame.
Oh, look, they're coming closer
I hope they do see me.
Mummy why are you crying?
Grandad says I'll soon be free.
I can hear their footsteps
They are very close to me
I'm off to join the soldiers
I'll be marching and be free.
She laid her son to rest, beside their family -
four brave soldiers, marching evermore.
© Crissouli 2021
Posted by Crissouli at 00:01 4 comments:

Email ThisBlogThis!Share to TwitterShare to FacebookShare to Pinterest
Labels: Can You Hear Their Footsteps? © Crissouli 2021

Thank You Is Never Enough 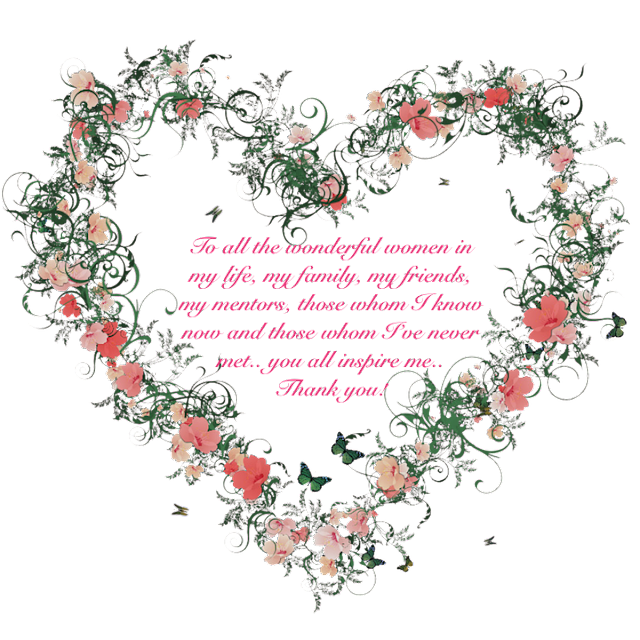 YOU WERE, SO WE ARE…

You who built the foundations of our family
who came from lands far away ..
you who built the future of many generations
yet knew so few…
if only you could look upon those of today
and see what a wonderful legacy you bequeathed
to all who live now and all who have passed before.

We may never have met, but I know your heart..
your strength, your determination,
your will to make the world a better place..
just as we of today’s world  long to do.
You are present in all those I share
so many years of history with..
my much loved mother..
my beautiful granddaughter and daughter..
and my lovely daughter in law
who is adding her own history to the mix…
you are present in my cousins,
my aunts, my niece, my grandmothers..
and in all the generations between them..
and all who have found their place by marriage.

We are a part of you, united by love and inspiration..
we gather friends around us,
those in whom we see something of kin
a familiarity and a similar purpose..
they are the family we choose for ourselves..
We are blessed, we are united
and bound together.. all because of you.

Reblogged as it will always apply..thank you is never enough ..CBG
Posted by Crissouli at 00:01 4 comments: 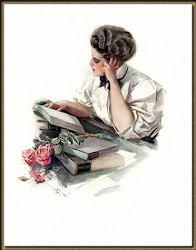 Crissouli
Sometimes, there are too many words within... sometimes they simply have to be written..... sometimes.... Since I was a little girl I have had a curious nature particularly in regard to who my family were...I was always asking questions and wanting to know more about where everyone fitted in to my extended family... now I have found the answers to many of my questions so have lots of new questions... all to do with family... You can contact me at crissouli (at) gmail (dot) com 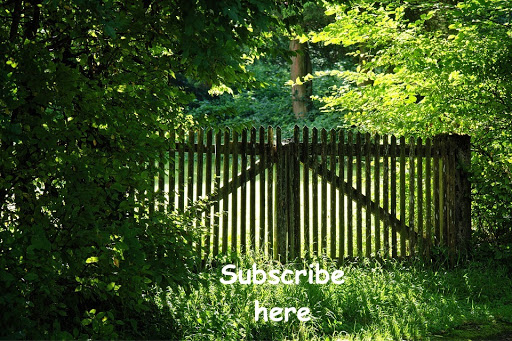